dancers having participated to projects 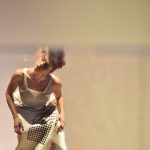 Of Italian origin, she works in France, Belgium and Italy between 2001 and 2018, since April 2016 she lives in Buenos Aires. After a solid training of fifteen years in ballet and modern-jazz, she graduated in contemporary dance at the CNR Boulogne-Billancourt and then she trained in Dance and Movement Therapy obtaining two university degrees in expressive pedagogy. In 2002, she founded CADMIUM Compagnie, for which she signed several choreographies and won the Paris Young Talents Prize with her first solo in 2008. She has been working for 13 years with Pé Vermeersch as a dancer and assistant and she dances since 2013 with DEOS, a company of Genes, with which she participates in a dozen creations. She develops a constant activity as a performer in public spaces, museums and art galleries, often collaborating with live music.